NASHVILLE – Less than a year after opening, Nashville International Airport®’s state-of-the-art Concourse D has earned airport industry acclaim for excellence. The Southeast Chapter of the American Association of Airport Executives (SEC-AAAE) this week announced Concourse D as the recipient of its 2021 Commercial Airport Architectural Project of the Year Award, an industry-recognized mark of distinction for BNA’s fourth major concourse.

BNA received the award among peers at SEC-AAAE’s annual members conference in Savannah, Georgia. SEC-AAAE is the largest chapter of the American Association of Airport Executives and represents airport management professionals in 12 Southeastern states, including Tennessee, in addition to the Virgin Islands and the District of Columbia.

“We are honored to receive this award from SEC-AAAE and are immensely proud of the Concourse D project,” said Doug Kreulen, BNA’s president and CEO. “This award represents more than two years of hard work that resulted in a multi-faceted modern concourse for BNA travelers. It also signifies $55 million in contracts for small, minority and woman-owned business enterprises (SMWBEs), a 72 percent local workforce and a commitment to sustainability. It’s BNA at its best, and we thank our SEC-AAAE colleagues for this tremendous recognition.” 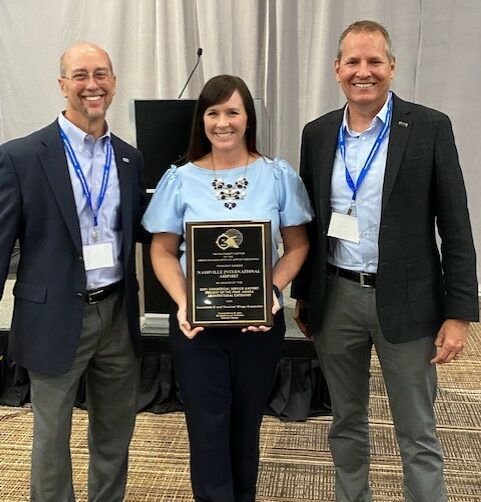 Concourse D is a major component of BNA® Vision, the dynamic expansion and renovation plan for Nashville International Airport. The $292 million facility opened in July 2020 with 115,000 square feet of new terminal space, six domestic aircraft gates operated by Southwest Airlines, compelling public art displays and a variety of customer conveniences. It was built in tandem with a 200,000-square-foot terminal expansion that added new ticketing and baggage claim space to the north and south ends of the central terminal, a 136,000-square-foot renovation of existing terminal space and an 11,000 square-foot central utility plant.

This award from SEC AAAE comes only three months after Concourse D received another noteworthy recognition: LEED Silver certification from the U.S. Green Building Council for green design and construction. Upon achieving LEED Silver, Concourse D became one of only nine newly constructed airport facilities in the world to attain this distinction under USGBC’s rigorous LEED v4 standards.

The Concourse D and Terminal Wings Expansion was the first major terminal expansion project completed as part of the ongoing BNA® Vision program, which is dramatically remaking the airport to meet future demand and existing needs. Other BNA® Vision projects to be completed by 2023 will include a larger central terminal, a state-of-the-art International Arrivals Facility, expanded central security checkpoint, an on-airport hotel, top-to-bottom terminal renovation, a variety of new dining, retail and service amenities and a massive terminal parking garage complex.

As with all other airport capital improvement projects, no local tax dollars are being used to fund BNA® Vision. Take a virtual 360-degree tour, view renderings and watch the BNA® Vision video at BNAVision.com.

About Nashville International Airport®
Until the impacts of the COVID-19 pandemic, BNA® was one of the fastest growing airports in North America with nearly 18.3 million passengers in 2019. According to a recent study, in 2019 alone, BNA generated more than $8.1 billion in total economic impact, supported more than 76,000 jobs in the region and produced more than $443 million in state, local and federal taxes. BNA receives no local tax dollars. For more information, visit flynashville.com. Follow us on Facebook: @NashvilleInternationalAirport, Twitter: @Fly_Nashville and Instagram: @FlyNashville. Learn more about BNA® Vision, our growth and expansion plan for the airport, at BNAVision.com.

®, COMMANDER BERRY FIELD®, JOHN C. TUNE AIRPORT®, and JWN®, among others, are the registered trademarks and trademarks of The Metropolitan Nashville Airport Authority (“MNAA”). Use of these trademarks without permission from MNAA is strictly prohibited.